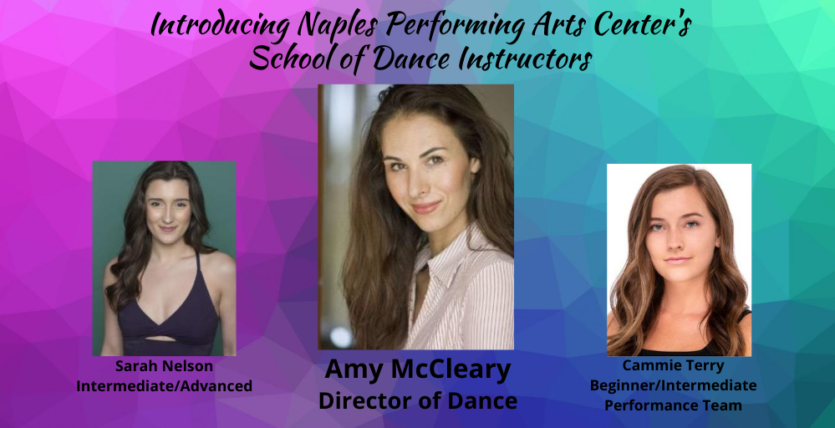 Welcome Amy McCleary as our new Director of Dance!

Amy Marie McCleary is a graduate of New York University’s Tisch School of the Arts and now serves as Broadway Palm’s resident director/choreographer. She trained at Ballet California with Keith Martin before moving onto musical theatre. After college Amy worked as a professional performer, starred in numerous regional theatre productions including CHICAGO (Velma Kelly), DAMN YANKEES (Lola), SEUSSICAL (Mayzie LaBird), CATS (Bombalurina) and THE PAJAMA GAME (Gladys). Favorite choreography credits include the National Tour of THE WEDDING SINGER, the International Tour of THE WIZARD OF OZ, MAMMA MIA, SATURDAY NIGHT FEVER, CATS, and FOOTLOOSE just to name a few. Amy has been teaching musical theatre dance, ballet and tap for close to twenty years all over the country with time spent at Flat Rock Playhouse, Florida Repertory Theatre, Gulfshore Ballet and as the Founder/Director of Broadway Palm’s Musical Theatre Intensive. She is thrilled to be dancing with you all here at NPAC!

Amy Marie McCleary has been choreographing since the age of six and is thrilled to join NPAC with their production of CHICAGO. Amy currently serves as Broadway Palm’s resident director/choreographer and has choreographed many of their hit shows including MAMMA MIA, SATURDAY NIGHT FEVER, CATS, JOSEPH . . . , JESUS CHRIST SUPERSTAR, GREASE and many more. She has played the role of Velma Kelly twice and earned a Broadway World award for best actress in 2018 for her portrayal. She also received a Broadway World award for her choreography in that same production. Her work has also been seen at Allenberry Playhouse (GODSPELL), Little Theatre on the Square (CABARET, THE MUSIC MAN, 9 TO 5) Florida Rep (THE BIG BANG), Gulfshore Playhouse (THE LADY DEMANDS SATISFACTION) and The Herb Strauss Playhouse (DIRTY ROTTEN SCOUNDRELS, SPAMALOT, AIN’t MISBEHAVIN’). Amy graduated from NYU’s Tisch School of the Arts with a BFA in Theatre and now makes her home in SWFL with her husband and children.

Amy will be teaching a variety of NPAC dance classes as well as leading our entire Dance Department!!

Talk about learning from the best! NPAC students have the privilege of training under this extraordinary professional as they embark on this journey! Welcome to the team Amy!

Sarah Nelson received her BFA/Commercial Dance Degree from the esteemed Dance Program at Pace University. She has trained at the Broadway Dance Center in New York City and the Robin Dawn Academy of Performing Arts.

Sarah has performed in numerous stage productions including Cats The Musical as Victoria. Sarah has also performed on many stages including New York Fashion Week. She has also danced in films and commercials on Television.

Sarah has been teaching dance for the past 6 years. She has taught Ballet, Jazz and Lyrical at the Robin Dawn Dance Academy. She has also taught at the Broadway Dance Center in New Jersey and multiple studios in Florida as a guest teacher. She has taught all facets of dance to all ages. Sarah will be teaching our Intermediate/Advanced Classes.

Cammie Terry has been dancing for 20 years! She trained at the esteemed Joffrey Ballet School in Chicago. She has been teaching dance full time for the past 4 years.

Cammie developed her passion for dance at such a young age. The first time she performed in the Nutcracker with the Joffrey Balley in Chicago, she knew this was what she wanted to do as a career. Cammie went on to study her craft at the Indiana Ballet Theater where she gained her love not only for dance, but for the stage. Cammie has led several winning performance and competition teams over the past several years. She is excited to be assisting with choreography and technique for the Barron Collier Cougar Dance Line this season.

We are thrilled to welcome Cammie to our NPAC teaching staff and we know that her amazing ability to work with children combined with her creativity and dance training, is the perfect combination to not only teach our students dance, but also incredible performance skills.

Cammie will be leading our 2 NPAC All Stars Performance Teams. She will be teaching our Beginner/Intermediate Classes.