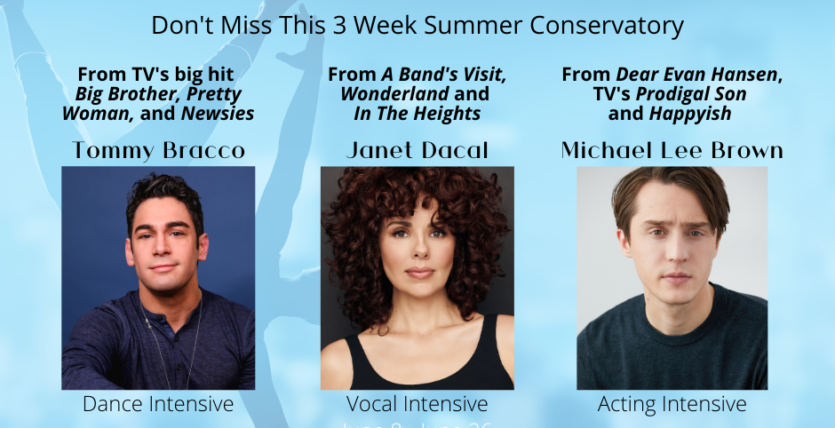 A three week summer conservatory taught by the best professionals in the business.
Spend 3 weeks preparing for success in the performing arts.

And most importantly, students will grow in their self confidence and determination to succeed.

This Conservatory is for all ages.

Students will be broken up into groups:

Content and curriculum given will be different for each age group.This conservatory is for all levels. Material will be given to challenge them at the level they are currently at.

You do not want to miss this incredible experience to have these talented and amazing Broadway stars come into your own home!

A mobile device or home computer is required.

Born, raised and currently resides in Staten Island, New York, Tommy’s not just your typical short, gap-toothed, Italian guido. With a passion for dancing & singing, Tommy has been performing on the stage and screen for as long as he can remember. He’s most known for competing on CBS’s Big Brother as well as originating roles in Broadway’s Pretty Woman and Disney’s Newsies. When he’s not performing, Tommy is usually at home with his family, eating his mother’s spaghetti & meatballs. Aside from family time and performing, Tommy is extremely passionate about teaching! He is the co-founder of Lion Arts, a theater company that amplifies confidence and works with aspiring young performers. He has traveled around the country, teaching workshops with many companies including Inside Broadway, and takes pride in making a difference in students’ lives!

Janet is currently starring as Dina in the National Tour of the 10-time Tony Award Winning Musical, The Band’s Visit. She has starred in several Broadway productions in NYC, most recently Prince of Broadway, directed by the one and only Hal Prince.  She has played multiple roles in productions including Eva Peron in Evita, Aurora in Kiss of the Spider Woman, and Sydney in It’s a Bird, It’s a Plane, It’s Superman. Janet starred in the Tony and Grammy Award Winning hit In The Heights.  After having originated the role of Carla in the Off-Broadway and Broadway productions, for which she received a Drama Desk Award, she took over the title role of Nina Rosario. She then starred as Alice, in Frank Wildhorn’s musical Wonderland. She appears in the original cast recordings of all three musicals Prince of Broadway,  In the Heights and Wonderland.  Janet has had the great pleasure of performing in renowned establishments such as Birdland and The Apollo Theater in NYC. Favorite television appearances include The Tony Awards and White Collar. She has been nominated for Carbonell Awards for her work in the productions The Last 5 Years and Five Course Love.

Michael Lee Brown just finished up performing weekly as the title role in the six time Tony Award and Grammy winning musical Dear Evan Hansen on Broadway. In addition to playing the title role, he covered the other two male principle characters, Connor and Jared, and is the first person ever to have performed all three roles on Broadway. Michael started writing and performing at a young age, learning the business and working professionally from Los Angeles to New York City. A Marymount Manhattan graduate, Michael has performed in various regional theater productions such as: Torch Song Trilogy at the Studio Theatre in Washington, DC under the direction of the infamous director Michael Kahn. He has been seen on television in shows Prodigal Son, Happyish, and live performances with the Dear Evan Hansen company on the Macy’s Thanksgiving Day Parade and on The Today Show where he and the cast received an Emmy Award. A composer himself, Michael’s first solo show comprised of both his original songs and fresh takes on covers, he had a sold out run at NYC’s iconic 54 Below. Michael recently released his new single “Rhythm of You,” and an EP titled “Way It Used To Be.” His music has premiered on Billboard and can be heard on all streaming services world-wide including iTunes and Spotify. Michael has always been fascinated by the various simple ways people pursue their goals and live happily, inspiring him to create and host his own podcast SimpLEEfy, available now on all major podcast platforms.